The no-touch app provided as a service provides a floating button that can be freely positioned anywhere on your screen, and is an app that instantly controls touch on the desired screen. You can decorate the screen with buttons that are full of personality, and are not as unobtrusive as widgets or app icons.

It reduces the current consumption by blocking the screen touch and turning off the LCD for those who enjoy streaming music on videos or Internet.
-Lock the screen while playing music and make the screen dark, then put it in your pocket or grab your phone comfortably.

When you left your phone with children, you were embarrassed by unintentional manipulation by calling your boss or an unwanted person?
-Please lock the touch to prevent children from making mistakes. You will soon lose interest.

When drawing a sketch along the screen, lock the touch and draw comfortably. Then switch to a white background to see the picture.
-Some phones may not work. But try it in a variety of ways.

Lock only a part of the screen and freely touch the rest of the screen.
-You can easily set the lock area in real time. (Up/down drag)

1.After running the NO TOUCH app, the top service switch is ON!!

2. Create an open padlock icon on the top left of the screen. (Touch lock button)

3. Click the corresponding icon on the desired screen to lock the touch to full screen.

6. In the basic operation above, special functions are provided according to the touch lock mode below.

2. Music mode: screen touch lock + screen off
-Used to listen to the sound without watching the video, such as videos or streaming music (audio).
-Used to watch videos or videos without others knowing.

5. Partial lock mode: Partial touch lock on the screen
-Touch lock can be selected by selecting about 30% of the screen.
-Drag the locked screen area up or down to move the locked area in the drag direction.

2. Proximity sensor locks the screen in a pocket environment or automatically detects a nearby hand or object.

3. Hide the lock button: Without displaying the touch lock and unlock buttons, the lock/unlock operation through the notification bar at the top of the screen.

5. You can set or unlock the partial touch area by using double-click while the touch is locked.

6. Floating on the screen, you can select a variety of icons used to lock and unlock the screen and set the size and transparency. 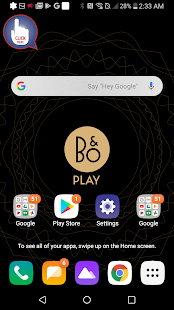 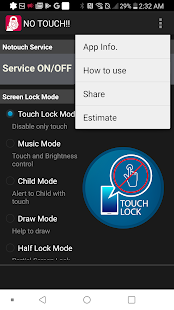 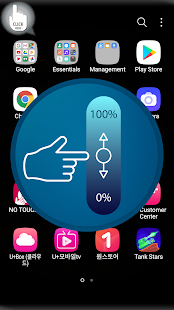 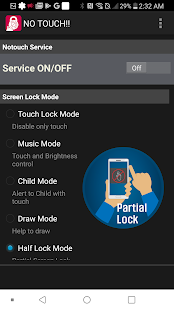 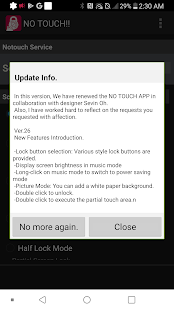 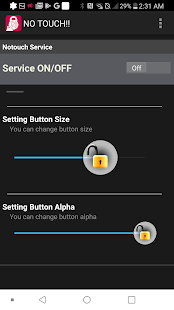 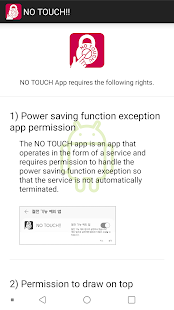